I don’t travel overseas very often, but when I do I try to make sense of it by writing a few things down. Not an itinerary, but a sort of summary.

Where it all began

Summer is an expensive time to travel overseas, especially if you haven’t planned it well in advance. We usually spend the time after Christmas just going to visit family. This January, on the way back from visiting cousins in Auckland and a son in Hamilton, we treated ourselves to two nights at the Chateau Tongariro. We wanted to revisit one of the highlights of our honeymoon in 1967. 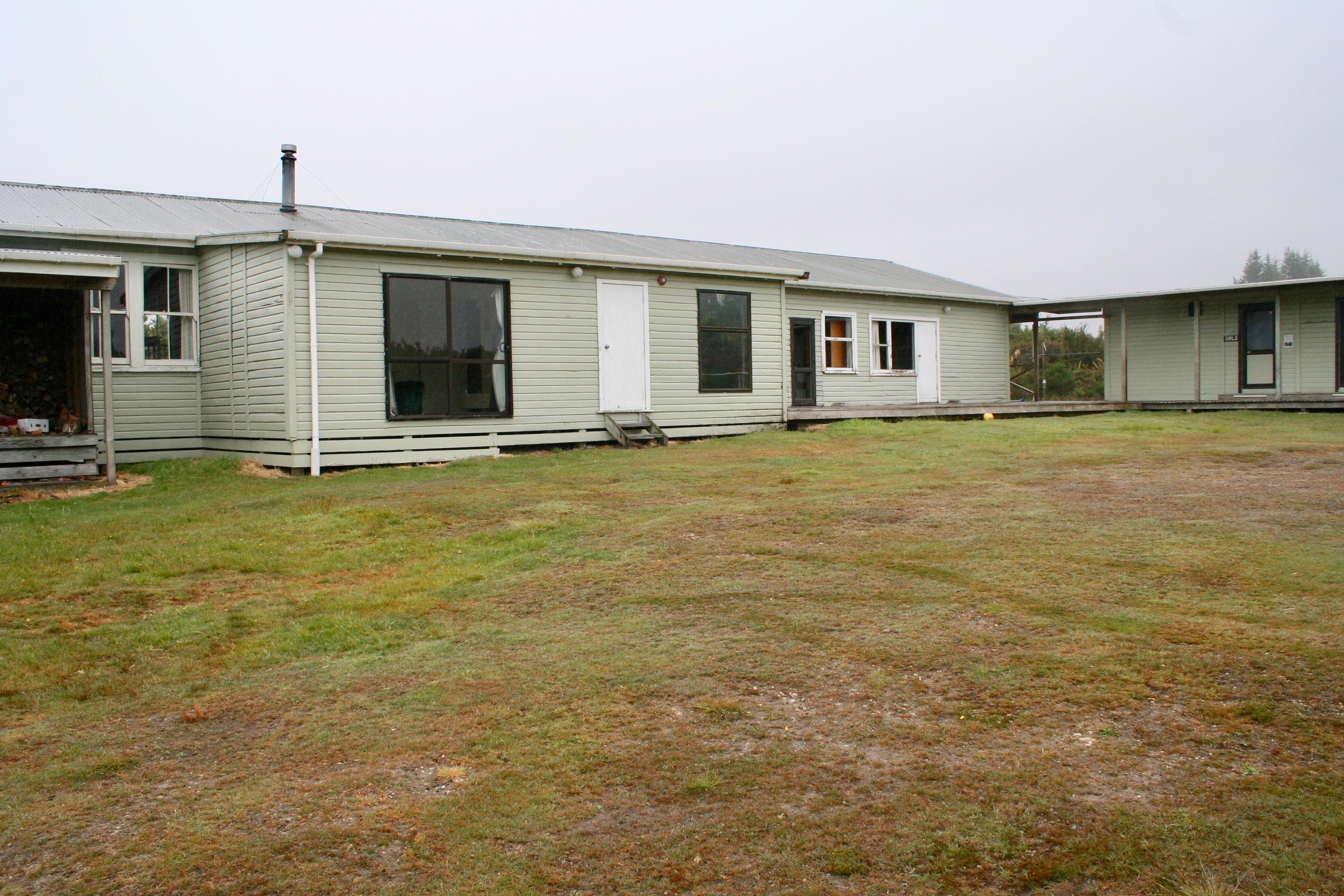 However, our interest in the area goes back further that. In 1965, in my last year at university, I was one of a number of students taking part in a survey of vegetation in the Tongariro National Park. We were based in an old saw-mill camp at a place called Taurewa, and this where my wife and I met.

Jenny was at the back of the queue for dinner one day, so on a whim I dished up two plates and took one to her. We talked and found we liked each other’s company. While I stayed on an extra day to climb Mt Ngauruhoe, Jenny went home to Hastings and told her family that she’d met a nice boy, but she’d probably not see him again. Little did she know … I was there to meet her off the bus at the beginning of the next term. We were married about three years later.

The camp is down an unsealed road off SH47, and took a bit of finding, but we were surprised to see that it’s still there and still being used.

The Devon Steam Railway is a preserved Great Western line that runs between Paignton and Kingswear. It’s a beautifully maintained railway of the period between the 1920s and 1950s. And it’s a Hornby train set. 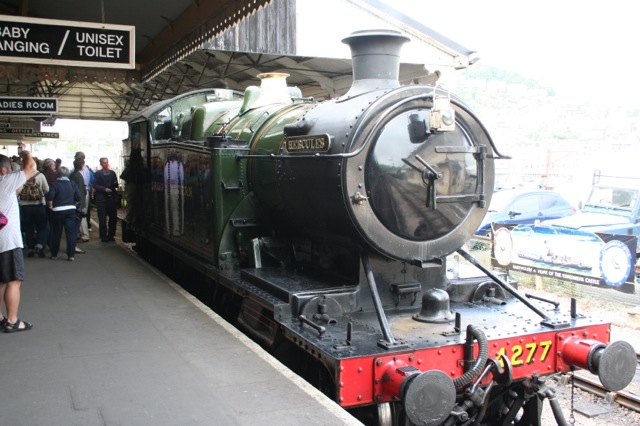 As a boy I didn’t have a Hornby train, but I saw them in the shops, and I was very familiar with them from a school friend’s Meccano magazine and also adverts in the Eagle comics that I used to get. Now, the funny thing is that, because the Hornby version of a train looked only vaguely like any train I had seen, as a kid I used to think of it as being in some sort of parallel reality, like a lot of other things in books and comics. And now, here is that other world.

The first impression was how big it all is. There are three reasons. One is because it’s hard not to think of it as a giant version of a toy. Then there is the effect of the wider track gauge in Britain — 1435 mm compared to the 1067 that I’m used to. But part is also due to the different approach to engineering. The whole thing, both trains and the trackside equipment, from bridges to buffer stops, is the result of a legacy of solid Victorian design, with lots of iron, rivets and really big bolts.

As for riding on it, I can see the advantage of the wider gauge in a country where curves can be more gentle — the ride is smoother and the carriages are spaciously comfortable. It makes for a grand little outing.

The mystery of the Devon Palm 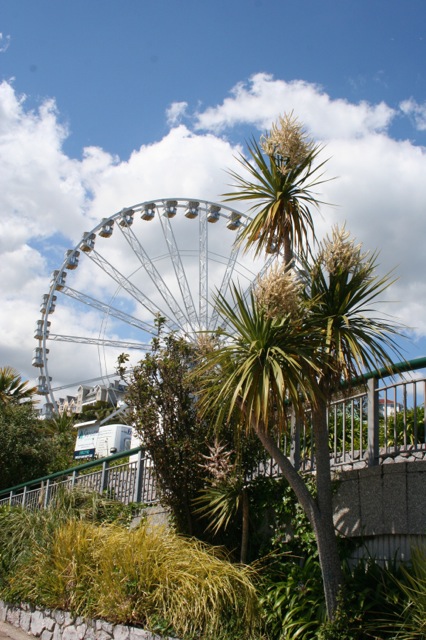 The ferris wheel on the Torquay seafront, with a cabbage tree in foreground

The Torbay area in southern Devon is widely publicised as ‘The English Riviera’. Apart from the mild climate, one of the features that help to create this image is the prolific ‘Devon Palm’. These trees are everywhere, and they look magnificent with their huge bunches of white flowers. They are sold in nurseries, where they are described as “a hardy coastal palm”.

The odd thing about this tree is that it is not even remotely related to a palm — it is in fact Cordyline australis, the indigenous New Zealand cabbage tree. Its simple leaves are the typical sword shape of a monocotyledon rather than the complicated leaves of the palm family, which have many leaflets on a central stem. The only common factor seems to be that they are both skinny-looking trees with leaves in tufts.

This iconic New Zealand tree has been growing in Devon and Cornwall since about 1820, and in Torquay particularly from the time they were planted for Kiwi soldiers recuperating there after the First World War. Rather than showing how warm Devon is, the cabbage tree is able to grow so well there specifically because the climate is not too hot.

In England, the cabbage tree thrives as well as in its homeland, and looks good because it is not attacked by the cabbage tree moth. And I’m sure they must be just as much of a curse to anyone who mows a lawn near them.

One of the disadvantages of living in a country with a comparatively small population is that there are a lot of things that never find their way this far south, and probably never will. For instance, chains of shops that I keep seeing mentioned online and in books: Apple, Ikea, Walmart and others. At the risk of seeming a bit naive, I’ve been curious to see for myself, and I can now tick two off the list. I’ve visited Apple stores in Australia and America, and been suitably jealous. And now at last I’ve been to an Ikea store (in Bristol).

One of the main things I wanted to see was the unusual layout of the shop, with a continuous path through it from entrance to exit. The nearest comparison I can think of is Frank Lloyd Wright’s Guggenheim gallery in New York, where the art is displayed in a continuous helical path from the top to the bottom of the building. I wonder if this was an inspiration to the Swedish designers.

Shopping in Ikea is like walking through dozens of rooms in other people’s houses. I’m impressed with the ingenuity of the displays and the design of the products. The flat-pack stuff looks like a step up from anything I’ve seen before. Although a lot is made of wood, the rest is possibly the same plastic-coated chipboard that will gradually sag under load — a pity that I won’t get the chance to find out.

And I had the salmon instead of the meatballs. Nice.

Apart from obvious differences in scenery, New Zealand is pretty much the same wherever you are. Same language, same advertising signs, same road rules, same unpredictable weather. But there’s a particular sound that makes a place seem not like home to me, and that’s the sound of the birds. In fact, one bird in particular — the Indian myna. Whenever I hear the sound of this bird, I know I’m not in the lower North Island any more, but somewhere further north.

It’s a sound I know from years of visting relatives in Hawke’s Bay, and now my sister in the Bay of Islands has a fancy birdhouse containing a family of mynas. I think she tends to romanticise them, but she could probably write a book about Mr and Mrs Myna and their annual crop of kids. Mynas not only have a loud voice, they have a personality to go with it. You can tell from the way they walk slowly out of the way of an oncoming car with perfect timing, rather than fly off in panic.

I have to say I don’t particularly like mynas. Not because they’re introduced, but because I just feel that they’re too pushy. When we holidayed in Rarotonga a few years ago, there were no native birds to be seen anywhere we went on the island, only mynas. The other birds haven’t been able to compete with with the aggressive introduced myna, and have retreated to the inland hills, while the mynas hang around the hotels grabbing scraps from tables. I would hate it if a change like that happened here.

I’ve just got back from a fortnight in New York — specifically Chelsea in the lower west side of Manhattan. At this time of the year it was starting to turn from summer to a cooler autumn, and the leaves were beginning to brown and fall. Here are some of my impressions from that brief visit:

Sitting in Madison Square Park in the evening, I saw a very long line of people queuing for a hamburger at the Shake Shack kiosk. They were there because it’s famous; it’s famous because it’s popular. I didn’t spend the time waiting for a burger (and I wasn’t hungry), so I’ll never know whether they’re best burgers in the world. But I suspect not.

I think they would only have to be a bit different in some way, and their reputation would build and become almost self-fulfilling. In a positive way, people would enjoy the anticipation, and their experience would benefit from it. Afterwards, they would enjoy being able to say they’ve actually been there and had a burger.

It’s a phenomenon that’s good all round, and it seems to be repeated with many institutions in many parts of New York. It’s part of what makes the city so special.

But then I could be totally over-analysing the situation. New York food is very good.

A matter of scale

Manhattan seems vast. In distance, in height, and also in time. The institutions and buildings are heavy with history and the wear of years. I am here as a visitor from a country where things are smaller and quieter, from a country that didn’t exist at a time when much of what I see now was already in place.

New York is place I feel I already know through writings and images, a place that has always been strange and exotic. But now I see a difference. To the writers and artists, this is where they lived, this was everyday life — this was ordinary. Their work was about what was familiar to them.

So as I stand in the middle of this, I can dial down the scale, recalibrate my feelings to the point where I think I can see what the natives see and feel, and I begin to realise that there are no fundamental differences.

People are people the world over.